Close
Please fill out the following form to report a missing variant issue from the database.
If this is a regular missing issue, please use the missing submission on the title in question.
Please only report variant missing issues after attempting a thorough search, and do not submit false information.
YOUR IP AND USERNAME WILL BE STORED WITH THE INFORMATION.
MISSING VARIANT INFORMATION
Upload the highest resolution cover scan you can find for this variant. Do not use watermarked scans. 5MB Max Size.
Submit Variant
Issue #171
Issue #173 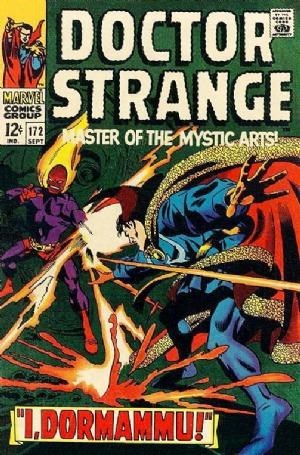 Basic Information
Published
September 1968
Comic Age
Silver
Cover Price
.12
Facts
Creators
Writer
Roy Thomas
Interior Artist
Gene Colan
Cover Artist
Gene Colan
Inker
Tom Palmer
Letterer
Irving Watanabe
Colorist
Editor
Stan Lee
Stories
Stories may contain spoilers
...I, DORMAMMU!
Revealing himself to his opponent, Dormammu adds Dr. Strange to his collection of prisoners. Dormammu then explains that when all thought he was destroyed battling Eternity, he was really transported to the Nameless Realm where he took control and plotted his revenge after Clea had appeared in that realm and he took her prisoner. With his enemies imprisoned, Dormammu leaves a demon to guard over them while he deals with more pressing matters. Freeing himself from his mystical confinement, Dr. Strange battles the guardian, killing it with the Eye of Agamotto. Freeing Clea and Victoria, and after a brief reunion with Clea, Dr. Strange sends both women back to Earth while he goes to deal with Dormammu. Summoning Umar to show her that he still lives, Dormammu then leads an army of Dykkors to the Doorway of the Dimensions; however, when they arrive there, they find that Dr. Strange is the only force barring their path.