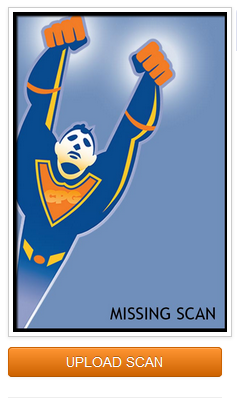 If you see an issue without a scan, click on that issue number. You will see a link to upload a scan.
Once you upload it and it is approved, you will be able to see your contribution.
CPG keeps track of how many scans each member uploads.
HOW DO I UPLOAD A PERSONAL SCAN FOR MY COLLECTION

If you wish to upload personal scans of your issues, you may do so in your collection management.
Select the book you wish to upload a cover for, and click the "Upload Cover Scan" icon.
This feature is available for silver and gold members only at this time.
WHAT IF I FIND A COMIC/ISSUE THAT IS MISSING?
Good, that's what we want and need! Please report the missing issues using the Forum.
But you will have to be patient. We will most likly get it entered in within the week if it is a valid entry. You may not get a reply post telling you that it has been entered either.
ARE NEWS STAND EDITIONS WORTH THE SAME AS DIRECT SALES EDITIONS OF THE SAME COVER?
Most of the time yes. But there are the certain issues that defy that. If you have a variant that is not listed in CPG. Let us know and we will research it for you.
HOW DO I GET MY COMIC BOOKS GRADED SO I MAY POTENTIALLY GET MORE FOR THEM?
Although there is never a guarantee you will get more money for a graded book, it is more likely.
We recommend contacting the Comic Book Certification Service (CBCS).
HOW MUCH ARE NON-ENGLISH COMICS WORTH?
Well to be perfectly honest, you will never get 100% of what the English versions of the comics go for. Most of the time it is between 30 to 60% of the condition value.
This is of course is true if the book happens to be published first in English and/or if you are trying to sell it in a Country that primarly buys English comics.
If the book was published in Germany and it was printing only in German then that is a different story.
WHAT MAKES COMICS INCREASE IN VALUE?
Rarity:
Is how unusual or how easily replaced the comic might be. You will be less inclined to part with a rare book easily, and rarity increases value.
Singularity:
Is whether the seller has more than one copy. If it's your only copy of a particular comic, you might be less inclined to part with it easily.
Contribution:
Addresses how the comic fits into a collection. For example, do you have a full run of the title, or is this a Donald Duck book in a sea of Avengers? A book that is part of a run of comics makes a bigger contribution to the whole collection.
Sentiment:
Is that intangible quality that links you to your books, and comes from love of the artform. Sentiment is never an issue for comic speculators, only for collectors, or for people who have inherited comics from a loved one.
Marketability:
Looks at the potential buyers available for your comics. The Internet has changed many of the rules that dictate your market. Online auctions, e-classifieds, and other potential sales sites mean that your comics have a much better chance of finding a buyer today than ever before.
IS ISSUE NUMBER THE SAME AS VOLUME NUMBER?
No.
Issue = The Book itself.
Volume = A Group of Books.
The issue number is the number of the book. This is found of the cover of the issue. There is usually only one issue of a certain number per volume (group)
The Volume is the number that is usually found in the indicia of the comic. The indicia can be found usually on the back of the cover, first or second page of the comic. The volume can contain many issues.
DO YOU REQUIRE A SPECIFIC FORMAT AND/OR RESOLUTION FOR MY SCANNED COVERS?
All scans must be in .JPG format. Please keep the size of the image below 500k if you can. Our system (if confirmed) will resize the image for the database. PDFs will be deleted.
WHY ARE YOUR PRICES ONLY IN US DOLLARS?
It is just not feasible for us to track every currency from every country around the world. We suggest you find the price you want then try the Easy Unit Currency Converter.
WHAT IF I FIND A PUBLISHER MISSING FROM YOUR DATABASE?
Please report any missing publishers to the Forum.
DO YOU HAVE A PRIVACY POLICY REGARDING YOUR MEMBERSHIP ACCOUNTS?
You can adjust your privacy settings by logging in and clicking here. We will never distribute your personal information.
DO YOU USE COOKIES ON THIS SITE?
Yes. Our cookies are used to verify your login information and remember your selections for certain UI elements of the pages.