Close
Please fill out the following form to report a missing variant issue from the database.
If this is a regular missing issue, please use the missing submission on the title in question.
Please only report variant missing issues after attempting a thorough search, and do not submit false information.
YOUR IP AND USERNAME WILL BE STORED WITH THE INFORMATION.
MISSING VARIANT INFORMATION
Upload the highest resolution cover scan you can find for this variant. Do not use watermarked scans. 5MB Max Size.
Submit Variant
Issue #3
Issue #5 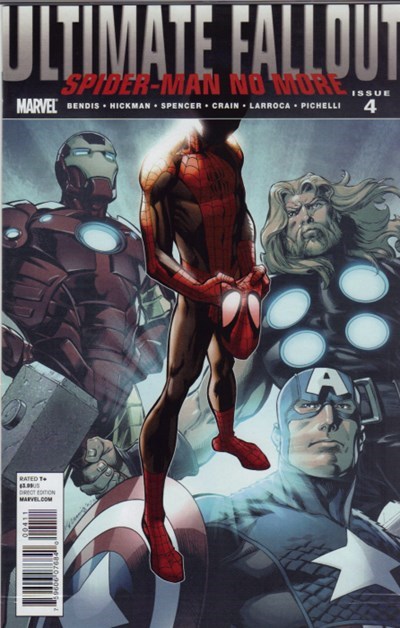 A new Spider-Man appears in New York City and defeats a violent Kangaroo. Many of the onlookers state that they believe someone wearing a Spider-Man suit so quickly after his death is in poor taste. When the young man unmasks, he also echoes the sentiment.

Reed Richards recalls how he escaped from the Negative Zone. He linked into various pieces of technology and teleported out. He thinks to himself that, "I'm going to solve everything". His experiment with survival leads him to create a "dome" and many "Children of Tomorrow". He laments that many of them will not "make it" in his plans.

In Washington, D.C., Valerie Cooper shares some ice cream with a reporter named Brett. The reporter, Brett, wants an interview with Captain America. However, in the course of the conversation Brett discloses her research and information with Val. Val quickly ends their meeting and phones her superiors and informs them that the world is about to find out U.S. government created mutants.