Close
Please fill out the following form to report a missing variant issue from the database.
If this is a regular missing issue, please use the missing submission on the title in question.
Please only report variant missing issues after attempting a thorough search, and do not submit false information.
YOUR IP AND USERNAME WILL BE STORED WITH THE INFORMATION.
MISSING VARIANT INFORMATION
Upload the highest resolution cover scan you can find for this variant. Do not use watermarked scans. 5MB Max Size.
Submit Variant
Issue #31
Issue #33 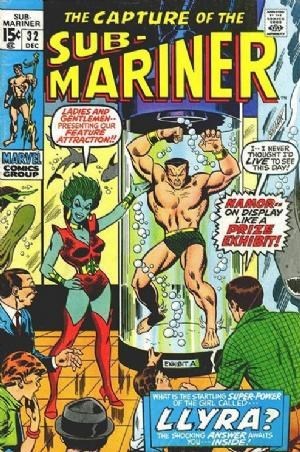 Seeking an undersea ally, Namor makes his way to the undersea realm of Lemuria. Namor meets Llyra, the empress of Lemuria, who has overthrown Karthon. She tells him of her origin in hopes of persuading him to join her conquest of the sea. Namor wants nothing to do with it and is caught off guard and captured. Namor meets Llyra's sister, Laurie, who frees him. Namor battles with the sea creatures Llyra can control and their battle ends in her death. However, Llyra changes back to Laurie and he realized that they both shared one body. Namor meets her mother and learns that it was her that had actually freed him.