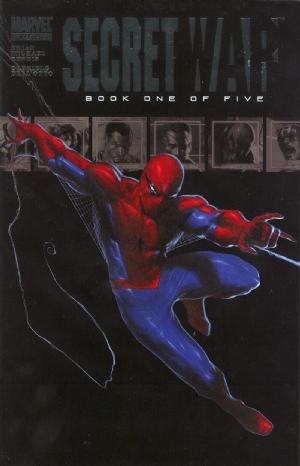 In Harlem, Luke Cage and Jessica Jones return to their apartment, and Luke pressures a group of neighborhood kids to get him the name of a local drug-dealer who is selling to kids. Inside the apartment they discover a woman who prompertly destroys the apartment with a massive energy blast.

"1000 feet over Langley, Virginia" aboard the S.H.I.E.L.D. Helicarrier, Nick Fury listens to a lengthy list of reports, and learns that the attack in Harlem put Cage in the hospital in a coma.

Fury travels to Metro Hospital where he finds Danny Rand and Jessica sitting with the comatose Cage. Jessica demands to know why Fury has come.

"One year ago," the Killer Shrike was apprehended by Iron Man and Thor, and interrogated by S.H.I.E.L.D. Agents Woo and Sitwell, who demand to know where Maddicks got the funding for his expensive equipment. Maddicks ultimately agrees to turn over the Tinkerer and leads S.H.I.E.L.D. to Philadelphia, but is killed by a trap left by Mason.

"Later," Fury searches the Tinkerer's workshop, finding little, and resorts to calling Natasha Romanoff, who has tracked the Tinkerer at the Latverian International Airport where he is picked up by a car with government plates.

Some time later, Fury meets with the President at the White House and delivers a report "on a project codenamed CIRCUIT" which has revealed that a number of "technological themed criminals" – including Jack O'Lantern, Killer Shrike, Goldbug, Grizzly, and Grim Reaper – "were getting their materials from...the Tinkerer," whose criminal endeavors were in turn being financed by Lucia von Bardas, "the elected Prime Minister of Latveria." Fury recommends taking decisive action against von Bardas, but the President suggests handling the situation "diplomatically" instead.

Fury storms out of the White House, explaining to Contessa Valentina de la Fontaine that the government's inaction will get innocent people killed, and that he refuses to "go through it again."

In the "present day," Fury looks on the comatose Luke Cage, and asks himself: "What have I done?"