Close
Please fill out the following form to report a missing variant issue from the database.
If this is a regular missing issue, please use the missing submission on the title in question.
Please only report variant missing issues after attempting a thorough search, and do not submit false information.
YOUR IP AND USERNAME WILL BE STORED WITH THE INFORMATION.
MISSING VARIANT INFORMATION
Upload the highest resolution cover scan you can find for this variant. Do not use watermarked scans. 5MB Max Size.
Submit Variant
Issue #6
Issue #8 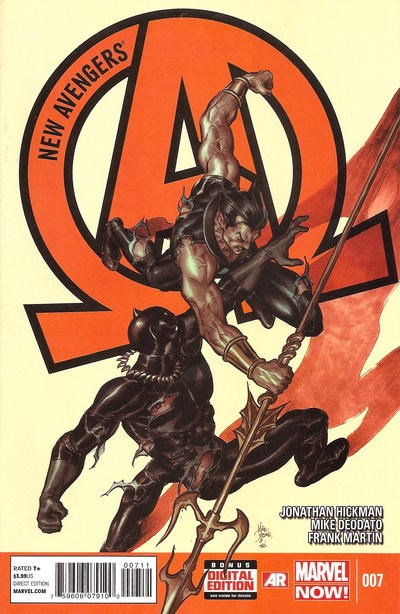 Key Issue
Basic Information
Published
August 2013
Comic Age
Modern
Cover Price
3.99
UPC
759606079100-00711
Creators
Writer
Jonathan Hickman
Interior Artist
Mike Deodato Jr.
Cover Artist
Mike Deodato Jr.
Inker
Mike Deodato Jr.
Letterer
Joe Caramagna
Colorist
Frank Martin , Rain Beredo
Editor
Tom Brevoort
Stories
Stories may contain spoilers
THRONES
Somewhere in the Orion Spur of the Milky Way Galaxy, Iron Man is communicating with Reed via a hologram. Reed informs him that everything has been quiet for the last 28 days, and there are no incursions slated for the next 12 hours. Reed also updates him on the status of Black Swan, who has been reading a lot and been made to spend time with all of the Illuminati members in shifts (except for Doctor Strange, who refused), and Terrax, who has not moved and still refuses to speak. He then fills Tony in on the status of the Illuminati members, telling him that Beast has undergone a radical physical transformation, and is teaching Black Swan latin, and being taught three unknown languages in return. Doctor Strange has been out of touch for a week, supposedly "indisposed". Reed suspects that something is going on in Attilan, but has been unable to investigate, due to being pre-occupied with a much bigger problem, the escalating conflict between Wakanda and Atlantis.

In the Necropolis, Namor approaches Black Panther, and tells him that Wakanda cannot win a war with Atlantis because of traitors in their midst who have been reporting the actions of Queen Shuri to Atlantis. He tells Black Panther that he wants to offer Wakanda favourable terms in exchange for peace and a cessation to hostilities, asking him to support it in the Wakandan council, since the two of them have better things to do than warring with each other. Black Panther agrees to consider it.

In Latveria, Doctor Strange and Reed Richards have been invited to dinner by Doctor Doom. In the midst of enjoying their meal, Doctor Doom reveals the reason for inviting them there. His surveillance caught the Illuminati on Latverian soil, and he demands to know what game they are playing, and the nature of the invading creatures that attacked his country. Reed tells him that there is no game, because games have winners and losers while this will have only losers. He thanks Doom for dinner, and warns him not to contact him about this matter again, before departing with Strange.
In Attilan, Black Bolt's wives discuss the rumours surrounding their husband, and his absence. He is building a machine of some sort with his brother Maximus.
In the Necropolis, Black Panther asks Reed's advice for what to do regarding the peace, stating that he does not trust Namor, and has vowed to kill him. Reed tells him that with what is at stake, the peace is necessary. Black Panther agrees, and when the time of the council meeting comes, he argues in favour of accepting the peace and ending the war, arguing that there is nothing to gain from war, and that he will personally make Namor pay for his crimes.