Close
Please fill out the following form to report a missing variant issue from the database.
If this is a regular missing issue, please use the missing submission on the title in question.
Please only report variant missing issues after attempting a thorough search, and do not submit false information.
YOUR IP AND USERNAME WILL BE STORED WITH THE INFORMATION.
MISSING VARIANT INFORMATION
Upload the highest resolution cover scan you can find for this variant. Do not use watermarked scans. 5MB Max Size.
Submit Variant
Issue #4
Issue #6 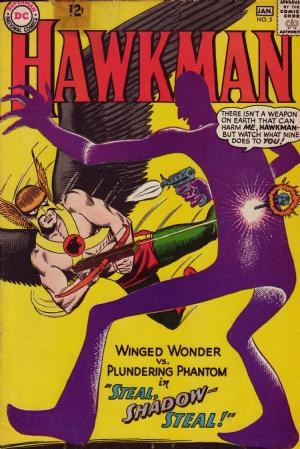 Basic Information
Published
December 1964
Comic Age
Silver
Cover Price
.12
Creators
Writer
Gardner Fox
Interior Artist
Murphy Anderson
Cover Artist
Murphy Anderson
Inker
Murphy Anderson
Letterer
Colorist
Editor
Stories
Stories may contain spoilers
Steal, Shadow --- STEAL!
Having stolen back his dimensiometer device (which Hawkman and Hawkgirl previously believed to have been broken) Carl Sands returns as the Shadow Thief. This time he is pulling off heists for his personal gain, having immobilized Thar Dan (the Xarapion who gave him the dimensiometer to begin with) and working out of the aliens lab so that he can continue to steal for his own personal gain. Unafraid of the fact that his device threatens to make the Earth undergo an Ice Age, Sands intends to keep on stealing from Earth, and then escape back to Xarapion when the ice age hits.
Naturally, his thefts garner the attention of Hawkman and Hawkgirl who try to stop him, and fail due to Shadow Thief's immaterial shadow form committing the robberies. Believing that somehow Hawkman and Hawkgirl may find a way to beat him, he creates other dimensiometer devices that have the opposite effect. In his next battle against Hawkman and Hawkgirl, he manages to attach the devices to them. What happens is that shadow-forms of the two heroes appear on Xarapion. Unable to see what is happening to their bodies on Earth and the fact that they can be harmed by things on Xarapion create all sorts of trouble for them.

They are eventually captured by Shadow Thief, who puts them in a stasis field along with Thar Dan, this in turn makes them completely immobile on Earth and suspends them over Midway City. Hawkman deduces that if his body is moved in the Earth dimension his shadow form would be moved in the Xarapion dimension. Commanding his birds to move him (Which is delayed when the police try to stop them, obeying Hawkman's previous order not to go near them too well) Hawkman is pulled out of the stasis field, he then frees Hawkgirl and Thar Dan. They then reverse the effects of the dimensiometers and capture the Shadow Thief. To make sure he stops using his own dimensionizer again, they have a cell constructed on Xarapion in the same spot his prison cell is on Earth, and trap him in a stasis beam, making him a prisoner on two worlds.