Close
Please fill out the following form to report a missing variant issue from the database.
If this is a regular missing issue, please use the missing submission on the title in question.
Please only report variant missing issues after attempting a thorough search, and do not submit false information.
YOUR IP AND USERNAME WILL BE STORED WITH THE INFORMATION.
MISSING VARIANT INFORMATION
Upload the highest resolution cover scan you can find for this variant. Do not use watermarked scans. 5MB Max Size.
Submit Variant
Issue #25
Issue #27 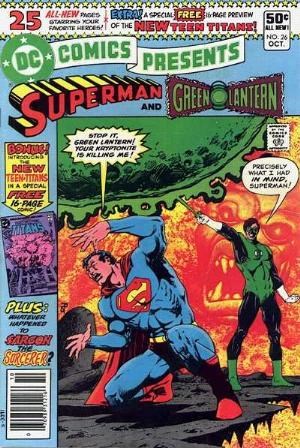 Key Issue
Basic Information
Published
October 1980
Comic Age
Bronze
Cover Price
.50
UPC
0709893121610
Creators
Writer
Bob Rozakis , Jim Starlin , Marv Wolfman
Interior Artist
Jose Delbo , George Perez , Jim Starlin
Cover Artist
Jim Starlin , Tatjana Wood
Inker
Dick Giordano , Steve Mitchell , Kim DeMulder
Letterer
Ben Oda
Colorist
Jerry Serpe , Adrienne Roy
Editor
Len Wein , Julius Schwartz
Stories
Stories may contain spoilers
Between Friend and Foe!
Superman is relieved from monitor duty aboard the JLA Satellite by Green Lantern. In the middle of his monitor duty he is seemingly contacted by fellow Green Lantern Archon Z'Gmora of the Cygnus system. His fellow Lantern asks for assistance telling him that he is trapped in another dimension and his power ring has run out of power, his only means of communicating with Hal is via his telepathy. With communication broken, Green Lantern recharges his ring and uses it to travel to this other dimension. However, he learns that he has fallen for a trap.

Archon is already dead and he had been replaced by a creature called N'Gom. The creature seemingly slays Green Lantern, takes his form and removes his power ring. It gloats aloud about how it was a singular entity until one day an energy tendril from a green sun split it into two distinct beings. The two would war with each other and find that they were evenly matched in their present forms. Since then the two have sought out more powerful beings to replicate in order to destroy each other. It had trapped Archon hoping to steal his power ring, but was forced to contact Hal Jordan when it proved to be powerless. Now with Hal's Power Ring and Power Battery in his possession, the N'Gom is confident that it can destroy its doppelganger.

However, Hal is not really dead, at the last moment he had used his Power Ring to separate his soul from his body. Not in an incorporeal form he wonders how he can stop this menace. Getting close enough to his ring to effect it with is will power, Green Lantern pulls Superman from Metropolis before the Man of Steel can save a man who fell from the top of a building under construction. There Superman appears before the N'gom posing as Green Lantern, and the Man of Steel believes it to be his friend. Worried that the creature will slay his ally, Hal re-enters his body and blows the N'Gom's cover. Leading to a clash between the two. Superman manages to fend off the Power Rings energy by wrapping his cape around his arm and using the yellow Superman emblem to deflect the any attacks.

Compensating for this the N'Gom uses the Power Ring to create a massive chunk of Green Kryptonite that threatens to kill the Man of Steel. Green Lantern then grabs a rock and strikes his enemy in the back of the head with it, breaking his concentration and sending the Kryptonite disappear. Superman resumes his fight with the N'Gom, and beats it senseless, knocking it out causes it to resume its natural form.

Superman hands Green Lantern back his Power Ring and he uses it to contain the N'Gom so that he cannot threaten anyone again. When Superman laments over the construction worker falling to his death, Green Lantern points out that time moves much slower in this dimension and they both return to Metropolis with enough time to save the falling man.
Where Nightmares Begin!
Robin arrives at S.T.A.R. Labs which is currently being besieged by terrorists. He prepares to move in on them, but suddenly finds himself transported into a strange new environment. He finds himself outside a large building called Titans Tower. He sees a few familiar faces such as Wonder Girl and Beast Boy (now calling himself Changeling), but also meets teen heroes he has never seen before, such as Cyborg, Raven and Starfire. Wonder Girl reminds him that these are the "New" Teen Titans, and the young heroes cannot understand why Robin doesn't recognize them.

There is little time to ponder the matter however as the Titans alert system indicates that an amorphous blob has been seen attacking S.T.A.R. Labs. Robin and the New Teen Titans go to S.T.A.R. Labs and discover that the blob creature is actually an alien from another dimension. One of S.T.A.R.'s scientists, Silas Stone, inadvertently provided the alien access to this dimension. He warns the heroes that unless the creature is stopped, it will convert all of the world's oxygen into methane, rendering the planet lifeless.

The Titans work together and upon Robin's suggestion, begin pumping oxygen out of the building, depriving the alien the ability to convert it to harmful methane. They drive the creature back through the dimensional aperture.

As the adventure concludes, Robin finds himself transported back to his original environment. He is outside S.T.A.R. Labs with an NYPD officer. The officer tells him that he had heard him mutter something about pumping the oxygen out of the building, so they took his suggestion and forced the terrorists to evacuate. Robin is pleased that the situation is resolved, but is still stunned by the strange people and images that he had apparently dreamed about.

From around the corner, Raven watches the confused hero walk away. What Robin experienced was not a dream, but a vision of the future - a vision provided for him by Raven.
Whatever Happened to Sargon the Sorcerer?
Sargon the Sorcerer, in retirement, is visiting the museum where his ruby is kept. He believes someone has been using it to commit crimes, but thus is soon disproved by the Matter Master's appearance and revelation that it has been him committing the robberies. 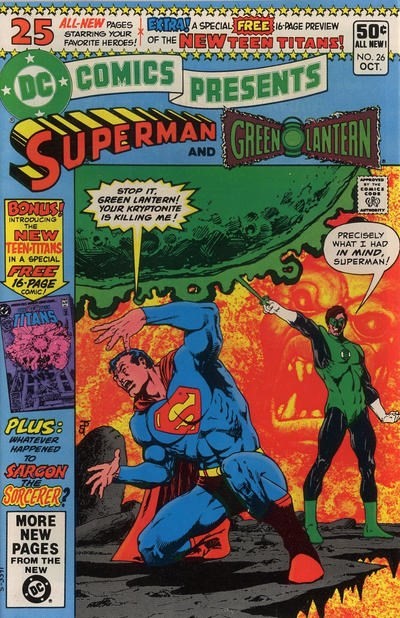 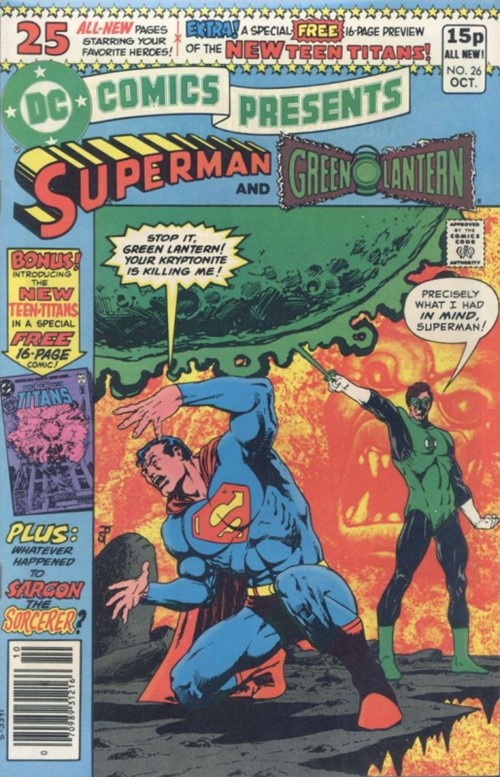