Close
Please fill out the following form to report a missing variant issue from the database.
If this is a regular missing issue, please use the missing submission on the title in question.
Please only report variant missing issues after attempting a thorough search, and do not submit false information.
YOUR IP AND USERNAME WILL BE STORED WITH THE INFORMATION.
MISSING VARIANT INFORMATION
Upload the highest resolution cover scan you can find for this variant. Do not use watermarked scans. 5MB Max Size.
Submit Variant
Issue #50
Issue #52 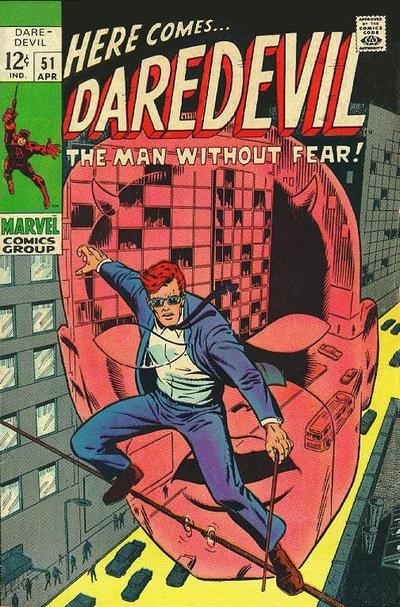 Realizing what Daredevil may have done, the enraged Saxon Starr decides to investigate where his robot first attacked Daredevil and soon learns that DD is really Matt Murdock. Starr leaves Murdock's home coming up with a plan to get revenge on the Man Without Fear.

Returning home, Matt gets a phone call from Karen Page, and the two set up a date, however a combination of the medical treatment in reacting with radioactive particles in his blood, and the constant harassment of Starr Saxon, Matt begins to hallucinate and have blackouts. When Saxon interrupts Matt's date with Karen, it pushes him too far causing the hallucinating Matt to flee in terror. Saxon then claims to be Matt's friend, and escorts Karen away, insisting that she bring Matt's Cane. Elsewhere the doctor who treated him at the prison receives a memo that warns him if Daredevil doesn't seek medical aid immediately, he will die.