Close
Please fill out the following form to report a missing variant issue from the database.
If this is a regular missing issue, please use the missing submission on the title in question.
Please only report variant missing issues after attempting a thorough search, and do not submit false information.
YOUR IP AND USERNAME WILL BE STORED WITH THE INFORMATION.
MISSING VARIANT INFORMATION
Upload the highest resolution cover scan you can find for this variant. Do not use watermarked scans. 5MB Max Size.
Submit Variant
Issue #17
Issue #19 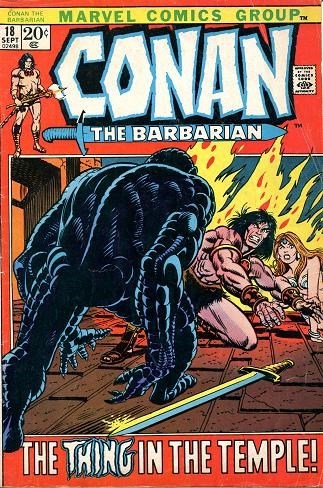 Basic Information
Published
August 1972
Comic Age
Bronze
Cover Price
.20
Creators
Writer
Roy Thomas
Interior Artist
Gil Kane
Cover Artist
Gil Kane , John Romita Sr
Inker
Dan Adkins
Letterer
Artie Simek
Colorist
Editor
Roy Thomas
Stories
Stories may contain spoilers
The THING in the Temple!
Aala, formally Kyrie, now rules Bal-Sagoth, with Conan and Fafnir as her de-facto bodyguards. One evening, when Conan and Fafnir are surprisingly drowsy, a brutish monster crawls from behind the wall hangings. Conan manages to push the creature into a fire, and, seeing more movement behind the hangings, stabs blindly. A priest loyal to Gothan, the former priestly ruler of the island, falls dead. He had cast a sleeping spell on Conan and Fafnir and sent out the monster; luckily Conan is made of sterner stuff. Unfortunately, a scream from Aala's chamber alerts the two that a bat-creature has sneaked into her room. The two warriors struggle with the monster and chase it into the tunnels. Aala is furious with the two men and tells her soldiers to kill them both. Finding an underground temple, Fafnir and Conan come upon Gothan's body, who had apparently been killed by the bat-creature. With the death of its master, the temple begins to collapse, and as Conan and Fafnir try to flee, they run into Ska, another pretender to the throne. Fafnir makes short work of the man and the two barbarians make it out of the tunnels as the entire area caves in, and a volcano erupts, burying the city. The two men cobble together a raft and desperately sail away, only to find themselves at the mercy of Prince Yezdigerd of Turan, on the way to battle. Conan and Fafnir join his crew.

You cannot view value information.
Either your session has timed out or you need to log in.
Please login, or sign up for an account. It's free to do!
ALTERNATE PUBLISHER VERSIONS 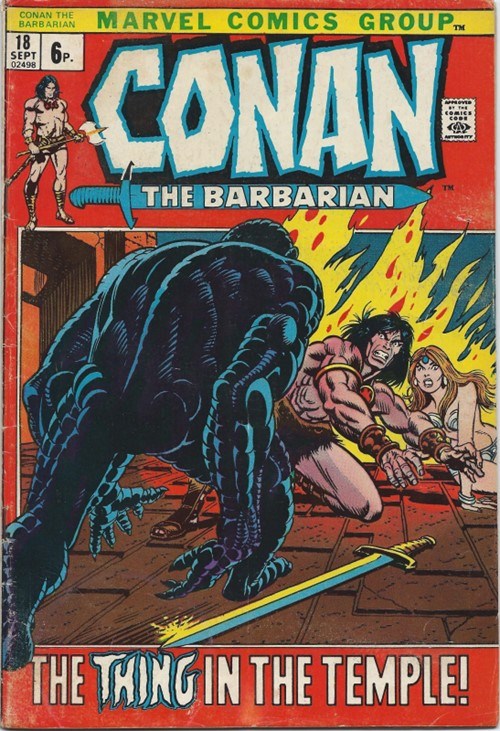