Close
Please fill out the following form to report a missing variant issue from the database.
If this is a regular missing issue, please use the missing submission on the title in question.
Please only report variant missing issues after attempting a thorough search, and do not submit false information.
YOUR IP AND USERNAME WILL BE STORED WITH THE INFORMATION.
MISSING VARIANT INFORMATION
Upload the highest resolution cover scan you can find for this variant. Do not use watermarked scans. 5MB Max Size.
Submit Variant
Issue #24 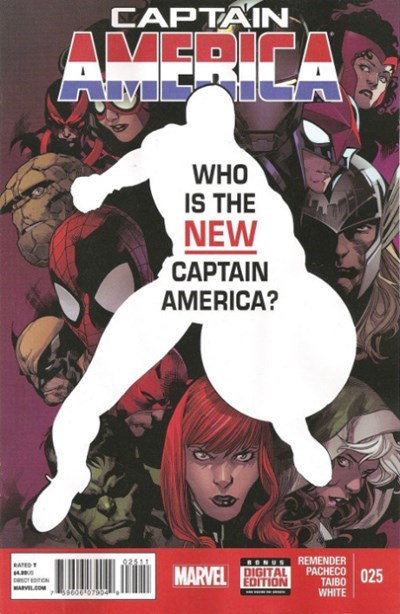 Key Issue
Basic Information
Published
December 2014
Comic Age
Modern
Cover Price
4.99
UPC
759606079049-02511
Facts
Characters
1st Appearance & Origin
1st Appearance1st App
Captain America (Samuel Wilson)
2nd Appearance
3rd Appearance
Appearance
Cameo
Birth
Origin
Origin Retold
Death
Appearance of Death
1st Cover
1st Appearance & Cover
Creators
Writer
Rick Remender
Interior Artist
Carlos Pacheco
Cover Artist
Carlos Pacheco
Inker
Mariano Taibo
Letterer
Joe Caramagna
Colorist
Dean White
Editor
Tom Brevoort
Stories
Stories may contain spoilers
The TOMORROW SOLDIER: Conclusion
Everyone witnesses as the explosion from Zola's bomb throws Falcon into the streets below. Iron Man is able to catch him and take him to Central Park, where all the Avengers have gathered. Fortunately, Falcon has survived, much to everyone's relief. Zola's army has been defeated and Jet denounces her father as a cruel man who feared the world so much he built an armor to hide from it and declares her intention to protect Earth alongside her new allies, but Zola replies he still loves his daughter and wants her to escape with him to their world by the time the Red Skull enacts his plan. Zola says it is only a matter of time before her allies betray her.

Jet leaves her father and runs to Falcon's arms, happy to see him alive. But their happiness is short-lived, as Sharon accuses Jet of being in league with her father, claiming that it was through Jet that Zola acquired DNA from the Avengers to create the UnAvengers and knew that Captain America had been left vulnerable, giving the right opportunity to attack New York. Although Falcon and Ian express confusion, Steve asks Jet to surrender without a fight so they can solve this. But Jet is angry at such accusations and says Zola was right about them all. She makes her way to Zola's tower with Ian hot on her trail. After rejecting her brother, Jet reaches Zola and father and daughter teleport away.

One week later, the Avengers meet up in the Avengers Mansion, where Steve announces that since he can no longer fight in the same manner as before, he and Sharon will help the Avengers as a mission operator and tactical advisor. They also name Sam as the new Captain America, with Steve giving him the shield. As Sam raises the shield, he shouts "Avengers Assemble!"

Meanwhile, at Castle Hydra, Madam Worm and a group of cloaked figures called the Unknown Council watch Sam's initiation as Captain America. They dismiss him as a serious threat, but they can shape him into the goal they need to advance their goals. Their new members, Chancellor Cassandra and the Drain, agree.