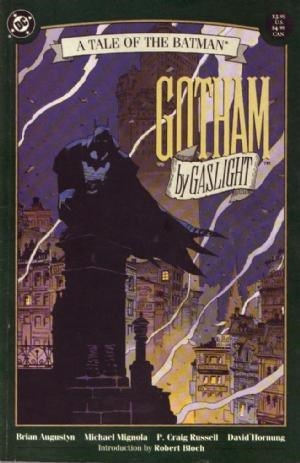 Basic Information
Published
February 1989
Comic Age
Copper
Cover Price
3.95
Creators
Writer
Brian Augustyn
Interior Artist
Mike Mignola
Cover Artist
Inker
Letterer
Colorist
Editor
Mark Waid
Stories
Stories may contain spoilers
Gotham by Gaslight & Master of the Future
Gotham by Gaslight - the best one-shot, ever
This book is awesome. Let’s start with the cover, that is the coolest Batsuit ever, and you get to see more of it on the inside too! I love how the lighting makes it look like a face on his chest. Okay, maybe now would be a good time to discuss what the book is about. Set in 1889 we see a very complex story played out in only forty-six pages. My hat’s off to Brian Augustyn, Michael Mignola, P. Craig Russell, David Hornung, John Workman, Mark Waid, and Robert Bloch.
Bruce Wayne has been abroad for the last five years studying human nature and honing his skills as a detective with Sigmund Freud and Scotland Yard, possibly even Sherlock Holmes. Bruce returns home to don the cape and cowl, at the same time as Jack the Ripper comes to Gotham and begins to kill women as he had in England. There is a fun nod to the Joker when Bruce visits James Gordon, but he is not the point of this story. Bruce plays the socialite while Batman stalks the night… as does Jack the Ripper. Bruce is framed for the murders and tried in court. Throughout the book we see some really cool newspaper headlines. Unlike our history books would lead us to believe Bruce deduced the identity of Jack the Ripper and must face him. There is one awesome fight scene when a robbery is stopped. And no review of this story would be complete without complimenting the use of accents in the book, it is everything that we in modern times think people back then talked like. The story, although not labeled as such, plays very much as an Elseworlds one-shot, meaning, it is not part of the standard Batman story (like an alternate universe type thing) and is complete between the covers without tie-ins to or from other stories.

If you don't have this book GET IT.