Close
Please fill out the following form to report a missing variant issue from the database.
If this is a regular missing issue, please use the missing submission on the title in question.
Please only report variant missing issues after attempting a thorough search, and do not submit false information.
YOUR IP AND USERNAME WILL BE STORED WITH THE INFORMATION.
MISSING VARIANT INFORMATION
Upload the highest resolution cover scan you can find for this variant. Do not use watermarked scans. 5MB Max Size.
Submit Variant
Issue #11
Issue #13 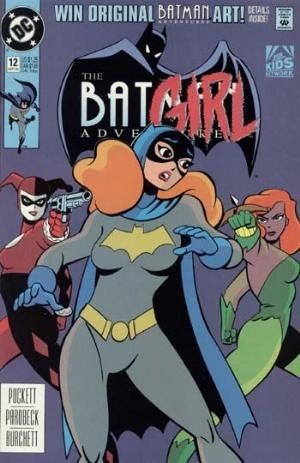 While Batman is pursuing a criminal outside Gotham, Barbara Gordon attends a costume party thrown by heiress Sandy Vanocouer. Despite her father's lectures on the dangerous life Batman leads, Barbara intentionally chooses a costume that mimic Batman's, styling herself as a "Batgirl".
At the party, Barbara finds Poison Ivy and Harley Quinn trying to kidnap Sandy for a ten-million ransom. With quick wits and a bit of luck, she manages to save Sandy, only to be cornered by the two villainesses. Before a fight can break out, all four women are knocked unconscious by the party's security guards, who are actually disguised burglars working for Catwoman.

Catwoman taunts her captives as they awaken, and secures her own objective: the priceless diamond being displayed one floor above Sandy's party. As Catwoman escapes with the diamond, Batgirl convinces Poison Ivy to cut her bonds, then sets off the diamond display's alarms to attract the police. Though Catwoman ultimately escapes, Batgirl manages to recover the diamond, earning a vow of revenge from Catwoman.

By the time the police arrive at the party, Barbara has already hidden her Batgirl costume in the trash. Cheerily, she tells her father nothing of importance had happened to her.