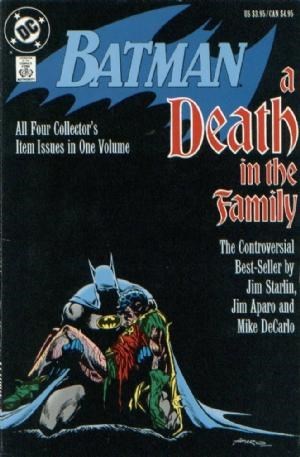 Basic Information
Published
January 1988
Cover Price
3.95
ISBN-10
ISBN-13
Creators
Writer
Jim Starlin
Interior Artist
Jim Aparo
Cover Artist
Jim Aparo
Inker
Mike DeCarlo
Letterer
John Costanza
Colorist
Adrienne Roy
Editor
Dennis O'Neil
Stories
Stories may contain spoilers
Jason Todd is spiraling out of control, and he decides to find his biological mother without Batman's help. He finally does track down his mother, a former associate of the Joker, but unfortunately, the Joker shows up during the reunion and beats Robin to death. Batman's quest for revenge brings him into conflict with Superman when the Joker reappears as an ambassador of Iran, with full diplomatic immunity. The twist to the story is that readers were encouraged to phone in with their vote as to whether Jason Todd would live or die. - Pending Approval