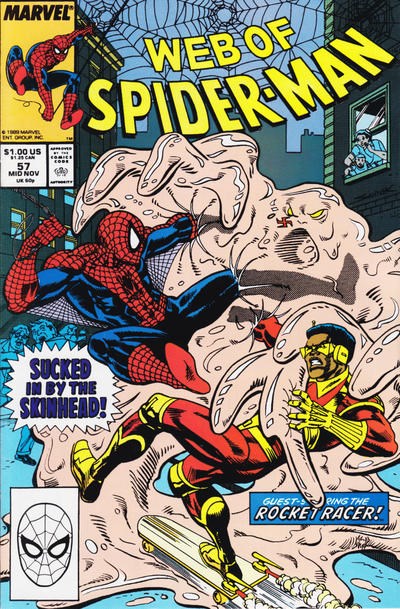 Basic Information
Published
November 1989
Comic Age
Copper
Cover Price
1.00
Characters
1st Appearance & Origin
1st Appearance
2nd Appearance
3rd Appearance
AppearanceApp
Rocket Racer (Robert Farrell) , Spider-Man (Peter Parker)
Cameo
Birth
Origin
Origin Retold
Death
Appearance of Death
1st Cover
1st Appearance & Cover
Creators
Writer
Gerry Conway
Interior Artist
Alex Saviuk
Cover Artist
Alex Saviuk
Inker
Keith Williams
Letterer
Rick Parker
Colorist
Bob Sharen
Editor
Tom DeFalco , Glenn Herdling , Jim Salicrup
Stories
Stories may contain spoilers
Flesh and BLOOD
After being doused in an experimental batch of web-fluid, the white supremacist named Eddie the Cross has been turned into a fluid mass of skin calling itself Skinhead. After seeing what has become of their leader, the rest of his gang flee from their junkyard hideout. Hungry for new flesh, Skinhead catches up with his former friends and consumes their bodies. After absorbing their flesh, Skinhead returns to his humanoid form, leaving nothing left of his friends but bones. As he rants about his quest to eliminate other races, he realizes he needs to stop talking to himself or lose touch with reality. He then spots Spider-Man swinging by and figures the hero is trying to track him down. He decides to lay low until he has a better handle on his new powers before attacking the wall-crawler.

Finding no trace of Eddie the Cross, Spider-Man heads back to Empire State University where the authorities have come and gone. He finds the Rocket Racer who asks if the wall-crawler had found Eddie yet. The Racer feels responsible for what happened to Eddie since it was his rocket that shattered the flask filled with the chemicals that ate away at his flesh. Spider-Man points out that Eddie was asking for trouble and he shouldn't punish himself for making a mistake. They both agree to keep on searching for Eddie in the hopes of getting him medical attention. They both split up so they can learn what they can about Eddie the Cross in the hopes that may give them a clue as to where he went. As he swings away, Spider-Man admits to himself that he feels guilty for what happened to Eddie himself, as it was his experiment that spilled over the bigot. In Soho, Mary Jane is unpacking boxes in their new loft apartment, looking at Peter's clothes she finds them hideous and makes a not to conveniently lose some of them