Close
Please fill out the following form to report a missing variant issue from the database.
If this is a regular missing issue, please use the missing submission on the title in question.
Please only report variant missing issues after attempting a thorough search, and do not submit false information.
YOUR IP AND USERNAME WILL BE STORED WITH THE INFORMATION.
MISSING VARIANT INFORMATION
Upload the highest resolution cover scan you can find for this variant. Do not use watermarked scans. 5MB Max Size.
Submit Variant
Issue #119
Issue #121 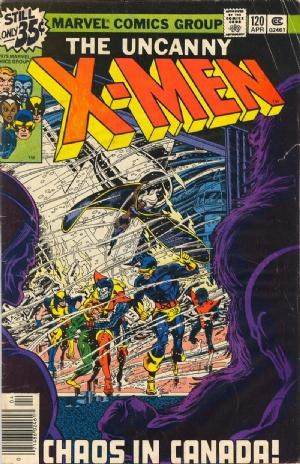 Meanwhile, in Japan, the X-Men bid farewell to their ally Sunfire who is thankful for the groups aid in stopping Moses Magnum. Before leaving, Wolverine pays his own goodbyes to Mariko Yashida by presenting her with a white chrysanthemum and tells her his real name is Logan. As the X-Men take a 474 back to the States with Colleen Wing and Misty Knight, they fly into a freak winter snowstorm. Storm warns Cyclops that there is something unnatural about the storm and that it refuses to respond to her mutant powers. Soon the plane is forced to make a diverted landing in Calgary, Alberta Canada. When Vindicator appears on the runway and orders Wolverine to surrender, the X-Men try to take off again but the plane is stopped and tossed into a hanger by Sasquatch. When Vindicator searches the wreckage he finds no sign of the X-Men. This is because the X-Men managed to sneak out of the aircraft before it was wrecked, and now in their street clothes they manage to sneak into the airport and get lost in the crowd. Nightcrawler, without any disguises for his normal appearance teleports ahead of the others and is easily knocked out by Northstar and Aurora.

The other X-Men meanwhile split up Banshee and Storm slip into the Toronto-Dominion Mall and decide to take in a little shopping. Vindicator manages to track them down to the mall and attack. When he confronts Banshee, Sean attempts to use his sonic scream but topples over in pain. Seeing her comrade on the ground, Storm unleashes the full fury of her weather powers on Vindicator causing him to flee the scene to continue searching for Wolverine. As Cyclops and Colossus try to lose themselves in the streets, Wolverine wanders through an old neighborhood he used to hang out in and remarks that somethings haven't changed when remarking on the drunks in the alley. This distraction allows Sasquatch to get the drop on Logan and beat him into unconsciousness.

When the other X-Men regroup, Cyclops notes that both Wolverine and Nightcrawler are missing and tells his team that if Alpha Flight intends on keeping them, they will learn that the X-Men are a force to be reckoned with.
This story is continued next issue....

You cannot view value information.
Either your session has timed out or you need to log in.
Please login, or sign up for an account. It's free to do!
ALTERNATE PUBLISHER VERSIONS