Close
Please fill out the following form to report a missing variant issue from the database.
If this is a regular missing issue, please use the missing submission on the title in question.
Please only report variant missing issues after attempting a thorough search, and do not submit false information.
YOUR IP AND USERNAME WILL BE STORED WITH THE INFORMATION.
MISSING VARIANT INFORMATION
Upload the highest resolution cover scan you can find for this variant. Do not use watermarked scans. 5MB Max Size.
Submit Variant
Issue #8
Issue #10

Basic Information
Published
August 1977
Comic Age
Bronze
Cover Price
.30
UPC
0714860219908
Facts
Creators
Writer
Bill Mantlo
Interior Artist
Sal Buscema
Cover Artist
George Perez
Inker
Mike Esposito
Letterer
John Costanza
Colorist
Phil Rachelson
Editor
Archie Goodwin
Stories
Stories may contain spoilers
...Like a Tiger in the Night!
A protest has begun at Empire State University over the proposed closure of night school courses due to budgetary constraints. Viewing this as a disadvantage to the students who take night school -- mostly African-American and Hispanics from the South Bronx, leads to a heated debate. When Professor Vasquez, a sympathetic teacher joins the protest when it is learned the university refuses to sell the Erskine Manuscripts, which could bring enough money to keep the night school courses running. Two of the people at the protest, Hector Ayala (secretly the White Tiger) and Peter Parker wonder if there is not something they can do. 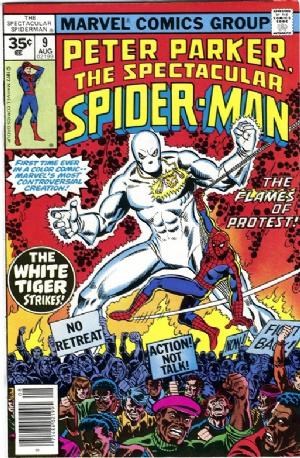 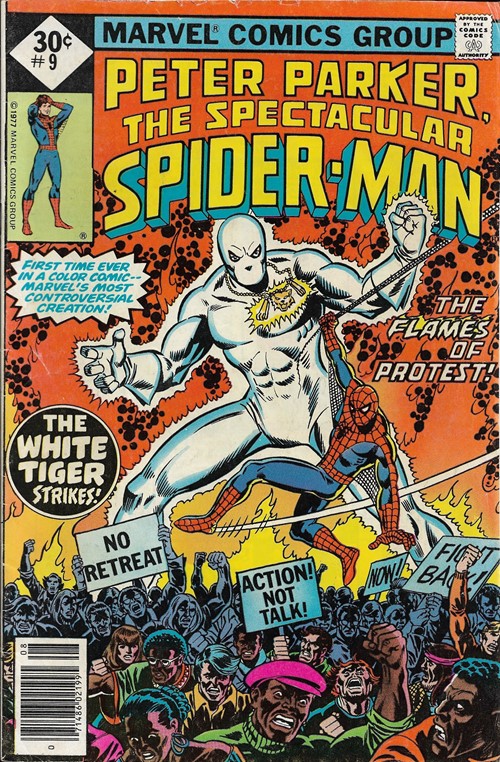