Close
Please fill out the following form to report a missing variant issue from the database.
If this is a regular missing issue, please use the missing submission on the title in question.
Please only report variant missing issues after attempting a thorough search, and do not submit false information.
YOUR IP AND USERNAME WILL BE STORED WITH THE INFORMATION.
MISSING VARIANT INFORMATION
Upload the highest resolution cover scan you can find for this variant. Do not use watermarked scans. 5MB Max Size.
Submit Variant
Issue #179
Issue #181 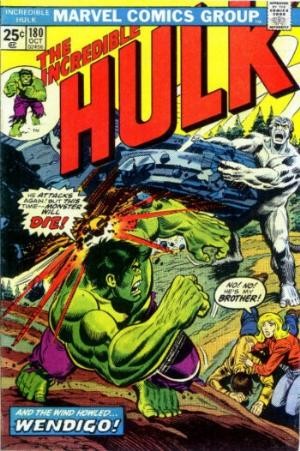 Basic Information
Published
October 1974
Comic Age
Bronze
Cover Price
.25
Facts
Characters
1st Appearance & Origin
1st Appearance
2nd Appearance
3rd Appearance
AppearanceApp
Hulk, The (Bruce Banner)
CameoCameo
Wolverine (James Howlett)
Birth
Origin
Origin Retold
Death
Appearance of Death
Creators
Writer
Len Wein
Interior Artist
Herb Trimpe
Cover Artist
Herb Trimpe
Inker
Jack Abel
Letterer
Artie Simek
Colorist
Glynis Oliver Wein , Christie Scheele
Editor
Roy Thomas
Stories
Stories may contain spoilers
And The Wind Howled...WENDIGO!
1st APPEARANCE "WOLVERINE" (James Logan Howlett)
The Hulk drops down out of the air and lands on a farm in upstate New York, crashing through farmer Jasper's brand new $658.27 knotty-pine fence. Unlike most that the Hulk encounters, Jasper does not turn and flee, but instead stands his ground and berates the Hulk for the damage he has caused. At first, the Hulk seems truly apologetic, but then he realize how silly it is to apologize to a "puny human" and bounds away.
Before long, he crosses the Canadian border and is instantly detected by the Canadian Air Force. They remember the Hulk from the last time he visited Canada, and are prepared to deal with him. In fact, this particular facility was built for the express purpose of monitoring the Hulk’s activities. Following the Hulk's progress on their radar, an unnamed military commander barks the order, "Mobilize – Weapon X!"
The Hulk finds a quiet patch of forest to relax in, but his comfort is quickly disrupted as a pack of ravenous wolves surround him. The wolves pile on top of him, driving backwards into a ravine. The Hulk flexes his muscles causing the wolves to scatter.
Meanwhile back at Hulkbuster Base, General Ross meets with Colonel Armbruster and Major Talbot. They discuss a pending visit by the President of the United States, and Armbruster is concerned that Glenn (having only recently escaped from imprisonment in Russia) may not be ready just yet to greet the Chief Executive. Glenn stands up and animatedly announces his determination to meet the President. Betty comforts him, and succeeds in calming Glenn down.
In Quebec, the Hulk continues wandering through the woods. Suddenly, he hears a mysterious feminine voice in his ear. He doesn't know where it is coming from, and the buzzing in his brain is driving him into even greater fits of anger. The sound eventually lures him to a small cave. Inside the cave are Marie Cartier and Georges Baptiste. Marie, having acquired knowledge of the dark arts, wishes to free her brother Paul of the curse that transformed him into the monstrous Wendigo. Her plan is to use an occult ritual to pull the essence of the Wendigo out of Paul's body, and transplant it into a surrogate host form – namely, the Hulk. Georges thinks that Marie’s plan is reprehensible, but she is more than willing to curse another, so long as it saves her brother.
As the Hulk enters deeper into the cave, Marie approaches him and offers him food and broth. The food is laced with a drug that renders the Hulk incredibly sleepy. As she prepares the ritual, the Wendigo enters the cave. The Hulk’s body chemistry quickly burns the drug out of his system, and he rises to fight the Wendigo.
The two monsters engage in an epic struggle that nearly tears the entire forest down. The Hulk hurls large boulders at the Wendigo, and the Canadian creature responds by bashing a tree trunk overtop the Hulk's head. As they continue to trade blows, another player enters the scene – a costumed adventurer with metal claws named the WOLVERINE.

You cannot view value information.
Either your session has timed out or you need to log in.
Please login, or sign up for an account. It's free to do!
EXCLUSIVES 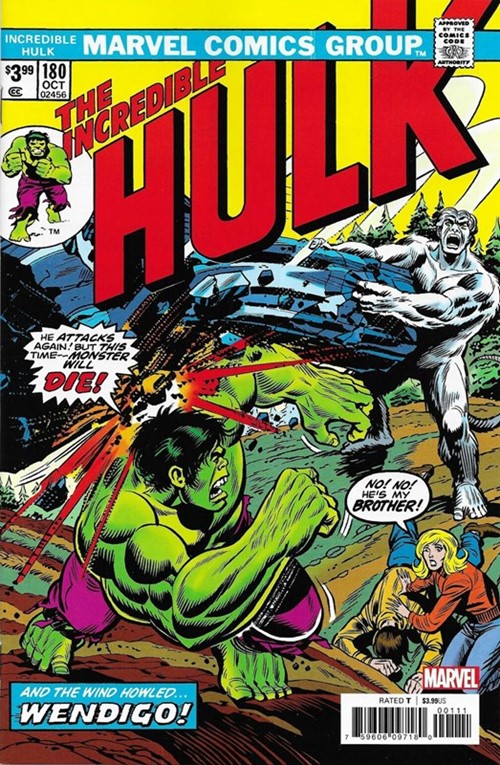