Close
Please fill out the following form to report a missing variant issue from the database.
If this is a regular missing issue, please use the missing submission on the title in question.
Please only report variant missing issues after attempting a thorough search, and do not submit false information.
YOUR IP AND USERNAME WILL BE STORED WITH THE INFORMATION.
MISSING VARIANT INFORMATION
Upload the highest resolution cover scan you can find for this variant. Do not use watermarked scans. 5MB Max Size.
Submit Variant
Issue #84
Issue #86 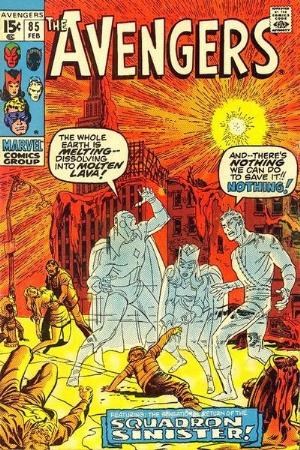 Basic Information
Published
February 1971
Comic Age
Bronze
Cover Price
.15
Facts
Creators
Writer
Roy Thomas
Interior Artist
John Buscema
Cover Artist
John Buscema
Inker
Frank Giacoia 'Frank Ray'
Letterer
Mike Stevens
Colorist
Editor
Stan Lee
Stories
Stories may contain spoilers
THE WORLD IS NOT FOR BURNING
Trapped on a strange world with his horse Aragorn, the Black Knight soon finds himself attacked and captured by Arkon. This is seen in a dream by the Scarlet Witch who wakes up screaming, telling her fellow Avengers of her nightmare, they decide to investigate further to make sure that the Black Knight is all right. Calling his estate in Britain, they find that he is not home. The Avengers then decide to pay a visit to Arkon's home world.

There, the Black Knight is brought before Arkon and his new consort: The Enchantress, who suggests that she uses her powers of seduction in order to manipulate the Black Knight and plot revenge against her and Arkon's mutual enemies. Asking Black Knight how he appeared on Arkon's world, the Knight explains that after fighting some crime in London, where he almost killed two criminals. Seeking advice from the ghost of his ancestor, the original Black Knight, who tells him the only way to be free of his ebony blades blood lust is to destroy it through magical means, and orders him to go to Stonehenge. There, he was confronted by an old woman who suddenly transported him to Arkon's world to find an enchanted well to destroy his sword. The Enchantress convinces this is all a trick orchestrated by the Avengers to dethrone Arkon. Enraged, Arkon orders a preemptive strike on the Avengers.

On Earth, Thor and the Black Panther are on their way to Avengers mansion when it suddenly vanishes, an image of the Enchantress informs Thor that it is her doing and the Avengers are her prisoner.

The Avengers inside the mansion soon find themselves, and the whole mansion, transported to Arkon's world where they must battle Arkon's army. During the battle, all the Avengers are captured and taken before the Enchantress and Arkon. When the Scarlet Witch again refuses to be Arkon's queen, he orders them locked away. Thor and Black Panther soon arrive and fight their way to Arkon's castle and free their comrades, and soon end up in a pitch battle with Arkon, the Enchantress and the Black Knight (who is still under the Enchantress' spell.) During the battle one of Arkon's thunderbolts knocks the Black Knights ebony sword into the enchanted well that was said to be able to destroy his sword. The battle is soon ended when Arkon realizes that the Enchantress had lied to him (however she manages to escape). Soon after the Avengers leave Arkon to transport themselves back home.