Close
Please fill out the following form to report a missing variant issue from the database.
If this is a regular missing issue, please use the missing submission on the title in question.
Please only report variant missing issues after attempting a thorough search, and do not submit false information.
YOUR IP AND USERNAME WILL BE STORED WITH THE INFORMATION.
MISSING VARIANT INFORMATION
Upload the highest resolution cover scan you can find for this variant. Do not use watermarked scans. 5MB Max Size.
Submit Variant
Issue #653
Issue #654.1 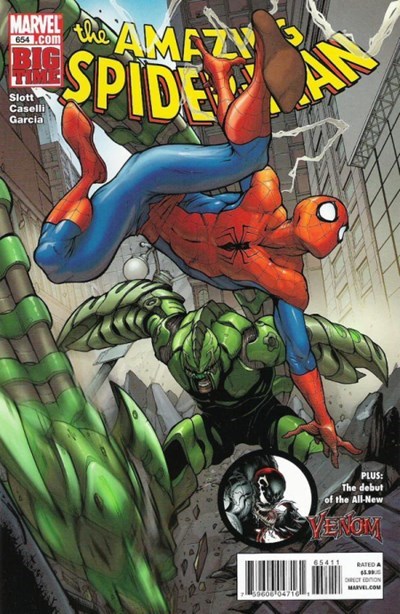 John arrives at the Apogee One, Horizon Labs' orbital space platform. As he gets off the shuttle, Doctor Octopus's octorobot comes out too.

At Horizon Labs, Max talks with Peter about his connection with Spider-Man. Peter thinks that Max figured out his secret, but Max then says that Spider-Man hired Peter to build his weaponry and tech. He also promises not to reveal his secret. Relieved that Max didn't discover his secret, Peter begins to work on his device and Max tells him what he can do to improve the design. As they finish the device, Max says that the device can devastate the Spider-Slayers's sixth-sense. Peter thanks Max for helping him. Max warns Peter that if Spider-Man is within the device's blast radius when it detonates, it will also disintigrate his enhanced senses.

Peter changes into Spider-Man and swings to the rescue. Communicating with the Thing, Spider-Man says that he has something that can defeat the Spider-Slayers. The Thing replies that Mockingbird is down.

As Marla and May take refuge from the battle, Marla scavenges an automated mandroid to counteract the latest model and help the Thing.

Spider-Man contacts Jameson, telling him to go to a safe place, but Jameson refuses.

In the Daily Bugle, Norah and Phil escape while Robbie Robertson tries to lure away the Spider-Slayers as he realizes that they are after him.

At the spa, Marla uses a device to emit a microwave frequency that paralyzes the Spider-Slayers, allowing the Thing to finish them off.

At the Daily Bugle, Robbie tells Ms. Marvel and Jewel to take him as far as possible to lure the Spider-Slayers away to prevent any further damage to the building. Jewel then grabs Robbie and they escape.

May, Jay, Jameson, Marla, the Thing, Ms. Marvel and Jewel gather in the street. Suddenly, the aricraft Smythe used to coordinate his attack crashes down nearby. One of the pieces hits Spider-Man in the head. Surprised that his spider-sense didn't warn him about, Spider-Man realizes that the disruptor also destroyed his spider-sense. Smythe then comes out of the ship, saying that the disruptor didn't have effect on him since he doesn't have an insect-sense. Smythe then attacks Jameson, saying that he was willing to let him live with the deaths of all his loved ones, but know he will kill him. However, Marla pushes Jameson out of the way and is mortally stabbed by one of Smythe's tentacles. Spider-Man then knocks Smythe out.

Jameson cradles Marla in his arms. On her last breath, Marla tells Jameson not to blame anyone for what happened to her. She tells him not to let hatred to ruin his life. She then dies on Jameson's arms. Spider-Man tells Jameson he is sorry. Grief-stricken, Jameson replies that he won't blame him from this. This is all his fault.

Flash is in the new Project Rebirth Headquarters in Washington DC where Aaron MacKenzie is hooking him up to some sort of chair. Flash is being briefed by General Dodge that he will be perfect