Close
Please fill out the following form to report a missing variant issue from the database.
If this is a regular missing issue, please use the missing submission on the title in question.
Please only report variant missing issues after attempting a thorough search, and do not submit false information.
YOUR IP AND USERNAME WILL BE STORED WITH THE INFORMATION.
MISSING VARIANT INFORMATION
Upload the highest resolution cover scan you can find for this variant. Do not use watermarked scans. 5MB Max Size.
Submit Variant
Issue #38
Issue #40 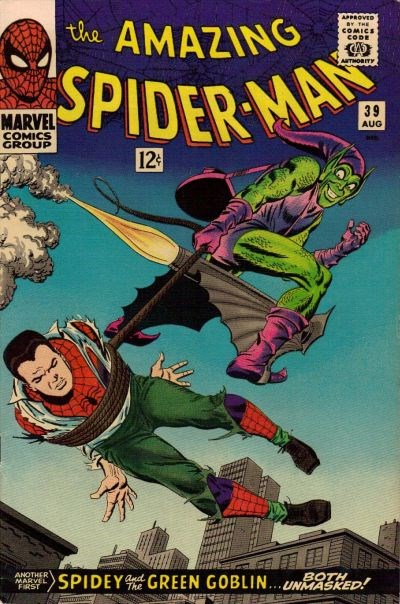 Key Issue
Basic Information
Published
August 1966
Comic Age
Silver
Cover Price
.12
Facts
Creators
Writer
Stan Lee
Interior Artist
John Romita Sr
Cover Artist
John Romita Sr
Inker
Mike Esposito , Mickey Demeo
Letterer
Artie Simek
Colorist
Editor
Stan Lee
Stories
Stories may contain spoilers
How Green Was My Goblin!
The Green Goblin is plotting his revenge against Spider-Man and plans to reveal his secret identity to the world. Meanwhile, Pete feels he’s coming down with something and visits Dr. Bromwell. During the visit the doctor tells Pete that Aunt May must not have any sudden shock or excitement to her or it could be fatal. As he goes to school, we see Harry Osborn being dropped off by his dad. When Harry asks if anything is wrong, his dad snaps angrily at him and Harry begins to worry. Pete sees what’s wrong and Harry starts confides in him his concerns much to the delight of Gwen Stacy. As Spider-Man webslings to clear his head cold, he finds a robbery in progress and starts to fight the gang of crooks. The longer he fights, the more suspicious he gets and finally is proven right when they hit him with a gas. This gas that Green Goblin has concocted prevents his Spider-Sense from working. As he exits the scene, he goes to change back to Peter Parker and the Goblin watches without being noticed. As the Goblin follows him home, he picks up his name on microphone and learns his true identity. The Goblin confronts him outside and begins his attack on Peter Parker. Pete fights to prevent Aunt May from knowing the truth but Goblin soon knocks Pete unconscious and wraps him in a steel alloy cable. As he has taken to the Goblin’s lair, Pete struggles against his bonds and since he’s confident in destroying Spider-Man, the Goblin reveals himself to be none other than Norman Osborn himself.